A Sudanese woman sentenced to death for abandoning her Islamic faith has been freed from jail, her lawyer has told the BBC.

She is married to a Christian man and was sentenced under Sharia law to hang for apostasy in May after refusing to renounce Christianity.

Her husband, Daniel Wani, said he was looking forward to seeing her.

He wanted his family to leave Sudan as soon possible, Mr Wani, who is a US citizen, told the BBC Focus on Africa radio programme. 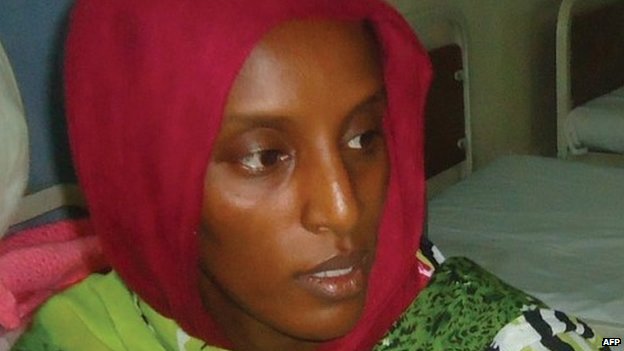 The death sentence for Meriam Yahia Ibrahim Ishag, who gave birth to a daughter in prison not long after she was convicted, sparked international outrage.

“We are very very happy about this – and we’re going to her now,” Mrs Ibrahim’s lawyer Elshareef Ali told the BBC.

“They have released her… she’s on her way to home,” he said.

“It’s a victory for freedom of religion in Sudan… By Mariam’s strong position, we believe that in the future no-one will be subjected to such a trial,” he said.