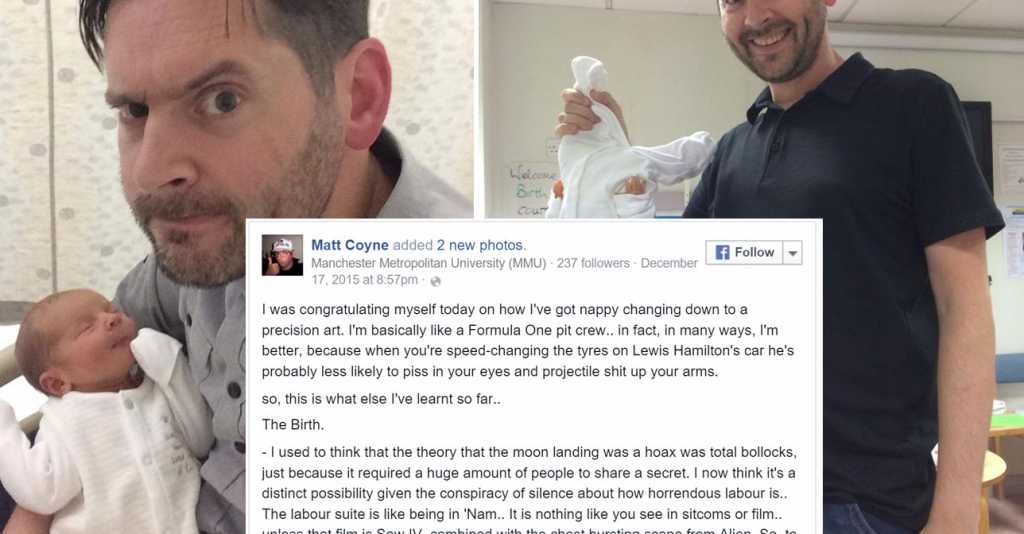 As a new Dad Matt Coyne was sharing his experiences so far with parenting, but he never expected this reaction.

“I was congratulating myself today on how I’ve got nappy changing down to a precision art. I’m basically like a Formula One pit crew.. in fact, in many ways, I’m better, because when you’re speed-changing the tyres on Lewis Hamilton’s car he’s probably less likely to piss in your eyes and projectile shit up your arms.
so, this is what else I’ve learnt so far..

The Birth.
– I used to think that the theory that the moon landing was a hoax was total bollocks, just because it required a huge amount of people to share a secret. I now think it’s a distinct possibility given the conspiracy of silence about how horrendous labour is.. The labour suite is like being in ‘Nam.. It is nothing like you see in sitcoms or film.. unless that film is Saw IV, combined with the chest bursting scene from Alien. So, to those who told me that the birth would be a magical experience.. you’re a bunch of f*cking liars. ..Labour is like magic.. but only in that its best when you don’t know how it’s done.
(In truth, the hardest thing about labour is seeing someone you love in such excruciating pain. But then Lyns did once make me sit through an episode of Downton Abbey so .. six of one, half a doz..)

The first week.
– I never knew this.. but babies breath in a jazz syncopated rhythm.. There is no set pattern to it and they stop breathing roughly every 40 seconds just long enough for you to think they’ve died.. Of all the dick moves your baby can pull, pretending that they’ve died is by far the most dickish and they do it all the time.
– A baby crying is a weird thing. During the daytime you can listen to it and think that it’s endearing and cute. …At 3am it’s like having the inside of your skull sandpapered by an angry viking.
– Baby piss in the eye really is only funny the first time and every single shit really is comically timed. The worst thing is when they do a ‘lure-shit’, then wait till you’ve got the nappy off mid-change to bring the real thunder.. It’s the same thing terrorists do when they time bombs to go off just as the emergency services arrive.
– Every item of clothing is held together with f*cking press-studs. There are three or four more press-studs than necessary just to make you look like a moron in front of your child.. who shows their disapproval by endlessly windmilling.. Dressing a windmilling baby is like trying to put a rabbit in a f*cking balloon. when you tell them to stay still they ignore you or scratch their own face. they’re mental.
(I’m thinking of launching a range of baby clothing that is all velcro, based on strippers trousers. You should be able to just hold a baby in one hand, the clothes they’re wearing in the other and just separate the two with a satisfying rip.. )
– Babies at this age don’t look like anyone.. every one sits around drinking a f*ckload of tea and says he looks like you, or he looks like his grandad or whatever.. In truth they all look like Ross Kemp.
( well, they look like one of the Mitchell brothers anyway.. if you’ve got an ugly baby.. its Phil)

The first month.
– Throughout my adult life I’ve tried to read a book a week or so. I’m not naive I knew that I’d have less time so I thought I’d promise myself that I’d try and read a book a month.. It’s now been a couple of months and the only thing I’ve read is a pamphlet on Breast pumps. (and I’ve still not got to the end of that, I keep falling asleep during the paragraph on ‘nipple confusion’..)
– It is possible to have so little sleep that your balls hurt.
– Does anyone remember the show ‘Touch the Truck’ with Dale Winton (before he had his face retro-fitted).?. It was on Channel 5 and basically 8 contestants put their hands on a truck and the last one to keep their hands on it and stay awake won the thing. Having a baby is like being on Touch the Truck.. the only difference is that on Touch the Truck you were allowed to have a piss and something to eat every 3 hours. ..and you won a truck.
– Whether Lyns likes it or not holding the baby above your head when its naked, and singing ‘The Circle of Life’ is funny.
– Its only when you’ve just got a baby to sleep that you realise how loud your house is.. I thought our home was pretty quiet and sedate but it turns out we have a bathroom tap that sounds like Godzilla f*cking a tank.
– Trying to walk round a supermarket takes ages because old women reeeally like babies and lock onto a pram with the dead-eyed tenacity of a predator drone. Dodging them is like playing Frogger. They’re wily, if there’s more than one of them you’re screwed, they’ll split up and hunt in packs like f*cking raptors.

After 3 months…Now..
– The most important thing ive learnt so far is that Charlie is supremely lucky to have Lyns as his mum. She’s tough, smart, funny and in love ..and she will make sure I don’t fuck up too much. Hopefully, her DNA will also batter my genetic predisposition towards big nostrils and man-tits.
He is without reservation the greatest thing that has ever happened to us both.. (Better than completing the world cup panini sticker album which, i did in both 86 and 90). He has already removed enough of my cynicism to include this paragraph.. and I feel pretty sure that I’m going to be good at this .. because as shit, disorganised and pathetically inept as I am.. it is beyond important to me that Charlie comes to no harm. and that, as far as I can make out, is not a bad measure.”

I was congratulating myself today on how I’ve got nappy changing down to a precision art. I’m basically like a Formula…